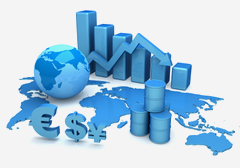 CFD group, named after the abbreviation for Contract for Difference, entails the trading of expectations for the future. In CFD trading, you do not physically get hold of the product, even though you invest in it through a contract for difference. You just buy expectations. A multitude of investment instruments, from various commodities to stocks and indices, can be the object of CFDs. The future price of the product traded under fixed-term contracts constitute the subject matter of CFDs.

CFD contracts are fixed date contracts. In other words, they have a date for commencement and another for end. The difference between the price of the contract commodity in the end and the beginning of the contract term is settled at the end date. This process is called a swap. You can invest in the CFD of your choice and withdraw your investment anytime.

At the end of the contract term for CFD contracts, open transactions are closed automatically and a new contract is made on the basis of the existing current price. Any open positions at the end of the contract are then exported to the new contract, which is opened for the same amount and under the same terms and conditions. This is called rollover. The menu named rollover dates displays up to date contract end and renewal dates. Furthermore, you can manually close your position without undergoing a swap before the rollover dates specified and you can open another position in the ensuing term.

CFD markets developed during the 90’s. The use of leverage in stock trading and the elimination of costs such as stamp duty made CFD contracts possible. The development of communications and the dissemination of Forex led to the current state of affairs with respect to CFDs, and provided them their speculative value and widespread use. CFD group contains numerous commodities, stocks exchange indices and shares of large companies. Analyses and trading with CFD group of which prices can be monitored real-time is not different compared to trading in any parity.